This is an important evening when we will explain about the subjects and choices your son/daughter will be asked to make for their Key Stage 4 courses next year. The Options Booklet will be issued to pupils before the evening and will be available online on the school’s website. A presentation in the Hall will explain some of the background to Learning Pathways and the external examination and qualifications system, give advice on making appropriate decisions and establish important dates to come. 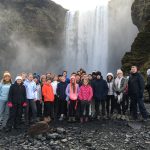 An early morning start for us 40 GCSE and A-Level Geography students off to Iceland for a few days. We were all very excited, even though we didn’t have much sleep, because we knew in a few hours we would be sat in the Blue Lagoon relaxing in a 38 degree C mineral-rich lagoon which was formed from geo-thermally heated water. The first stop when we got to Iceland was the bridge between two continents, where we stood between the Eurasian Plate and the North-American Plate, which move about one inch per year. The gap between them now is quite big and you can see how they once fitted together. The last stop for the first day was the much anticipated Blue Lagoon, which lived up to it’s expectations. We arrived at the hotel that night tired but very relaxed after a great day.

Day two was another early start as we wanted to get on the road because we had lots of activities planned. The first stop was Thingvellir Rift Valley where we learnt about how the plates moved apart and how the layers of the rocks were layers of lava from all the previous eruptions. I also learnt that lava stops plant growth and most of the land is covered in moss because of the this. We visited the Geysirs, which is a geo-thermal area of steam vents and hot springs. Strokkur Geysir, the very active star, erupts every 6-8 minutes, we were lucky and managed to see it erupt a few times. We also visited the Gullfoss waterfall and the Hellisheidi Power Plant, which provides electricity to the city of Reykjavik. That night we went into Reykjavik centre where we explored some of the shops. 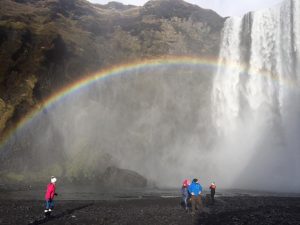 On the final day we visited Seljalandsfoss Waterfall, where you can walk behind the waterfall but you get quite wet. We visited the Eyjafjallajökull Visitor Centre, which is where we learnt about a family who lived through the 2010 eruption of Eyjafjallajökull. We learnt about the story of their farm and how the ash helped the crops grow but caused a lot of harm to the animals. The next stop was the Skógafoss Waterfall. This was a beautiful waterfall and you could climb over 400 steps to reach the top of it. The view from the top was magnificent. The Sólheimajökull Glacier was 8km long and 1-2km wide, which will be larger in winter and will shrink in summer because the sun will melt the ice. You could see where some ice remained after the glacier retreated. The final stop of the trip was Reynisdranger black basalt beach. The beach was rocky and very windy, the tide was also very strong. The last morning, we got up extremely early to come home and had to wait a while on the plane while it defrosted. Overall it was an amazing trip with an amazing group of people.